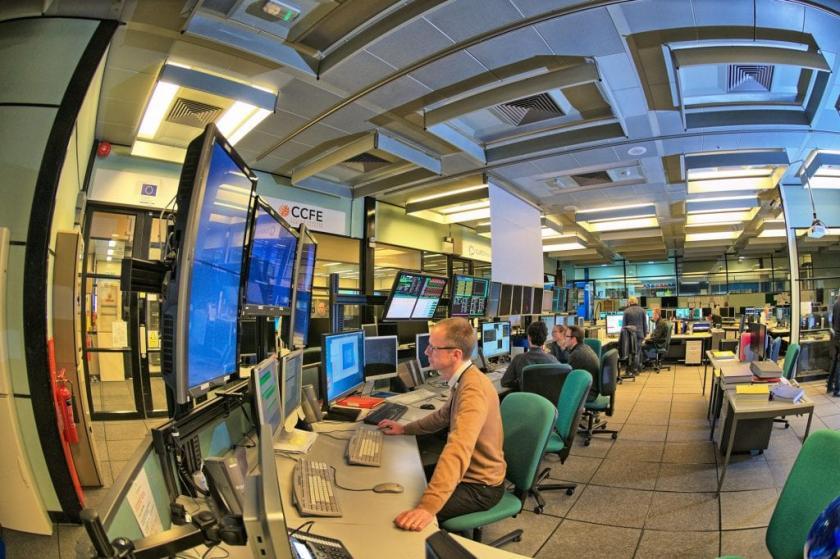 A vital discovery on how to force the extreme heatload away from a fusion reactor’s exhaust system while maintaining high performance has been discovered in recent tests at the Joint European Torus (JET) device at Culham.

In machines like JET, which use the tokamak reactor concept, an exhaust system known as the ‘divertor’ removes both the extreme heat and impurity particles from the hot plasma fuel.

One of the problems with scaling up JET (the EUROfusion flagship research device hosted at CCFE) to a larger machine like ITER – the international reactor-scale experiment being built in France – is that the divertor components in the latter device will not be able to take extreme levels of exhausted heat as they will damage the divertor. This is why the importance of the experiments carried out on JET at the start of the latest run of tests cannot be underestimated.

Scientists working on JET can spread the heat load across different tiles by moving the ‘strike point’ (specific divertor tiles which spread the heat), but in ITER the heat load will be much higher than in JET and the strike point cannot be moved. Therefore, in order not to melt the divertor, the power has to be radiated before reaching divertor tiles.

One solution to this problem is to use a gas as an impurity (often nitrogen) to cool down the plasma by radiating the heat over a wider surface area within the divertor region. But nitrogen can break down into additional compounds – leading to tritiated ammonia – and this is not compatible with JET’s processing systems. The alternative is to use neon, but previously the level of heating power available on JET has meant this hasn’t been able to achieve the same effects as nitrogen without affecting how well the plasma is confined in the tokamak; a key factor in fusion reactor performance.

However, taking advantage of increased heating power and additional neon being injected into the plasma, scientists have found the effects are just as good – something hugely positive for ITER.

“The ITER divertor is not able to withstand high heat flux, so ITER has asked us to find out if neon can do the same as nitrogen in terms of both the exhaust and the confinement,” he said. “We needed to develop a scenario in which the heat is spread out and not sent to the divertor immediately. We have had success doing this with nitrogen because it radiates mostly in the divertor area. This is what we want – we don’t want heat radiation in main chamber, because it can reduce performance in the plasma – and so from this point of view, nitrogen is perfect. There is only one problem with it and that is that nitrogen is chemically active. Nitrogen can act to form ammonia and we don’t want to produce tritiated ammonia.”

Carine Giroud, who coordinated the experiment, explained that ‘H-mode’ or ‘high confinement plasma’ is achieved by the formation of an insulating barrier in the edge region of the plasma known as a ‘pedestal’. This pedestal – which acts like the wall of a thermos bottle – separates the very hot plasma core from a cooler layer of plasma and away from material surfaces. It was important for these experiments because as long as the impurity radiates in the divertor region, it will have limited impact on the plasma’s confinement. The higher this barrier (or pedestal), the more fusion power can be generated as it lifts the core plasma temperature to very high temperatures where it can be efficiently confined in the tokamak.

Carine said the key success point, which had not been realised before, was the discovery that neon could be used to radiate and improve the pedestal – this in turn reduces the power load and improves plasma confinement. “This is significant for us, as it wasn’t something we’d achieved in a previous experiment,” she said. “We had extra power from JET’s neutral beam heating system which allowed us to put in more neon, and it was both these elements which led to the improvement. We haven’t yet achieved our target for reducing power to the divertor tile at the outer strike point, but we have seen that the temperature of the divertor tile didn’t increase significantly during the time where the radiation from the neon was applied. This was something we could do with nitrogen in previous years but not with neon – but now we can. With the impurity, we have a reduction of power load to the divertor, and an improved pedestal – something which influences good plasma confinement. We are in a win-win scenario.”