FRINGE is a research and innovation action funded under H2020-FETOPEN program that is focused on the development of a genuinely new hybrid-technology for cancer therapy. FRINGE aim is to combine the advantages of both photo-medical and neutron-based therapies to achieve high tumor treatment efficiency as well as large penetration depth in tissue. The NCSRD FRINGE scientific team comprises research scientists from INRASTES, INN and INPT performing proof of principle experiments using accelerator and reactor based neutron sources in Greece and abroad, as well as neutronics calculations to optimize the experimental set-ups and theoretically interpret the results.

A. Proof of principle experiments - Chemical agents (photosensitizers, PS) containing metal centers, like Gd, that are specially designed for FRINGE are irradiated with neutron beams to test the hypothesis of an efficient energy transfer from neutrons to the Gd core and then to the PS electrons. The methodology can be verified by the detection of fluorescence  and singlet oxygen luminescence emitted from the samples during irradiation. Irradiation campaigns were performed at the NEUTRA and ICON instruments at the Swiss Spallation Neutron Source (SINQ) at Paul Scherrer Institut (PSI), Switzerland, at the HK-1 thermal neutron line at the LVR-15 reactor, in UJV Rez, Czech Republic, as well as the Tandem Accelerator Laboratory, at NCSR Demokritos, Greece.

This project is an initiative in the field of cultural heritage and authentication studies providing techniques for non-destructive, multi-element analysis of objects that are too precious to damage for sampling purposes.

Large sample neutron activation analysis (LSNAA) is a novel technique, which enables non-destructive analysis of intact bulk objects, up to several liters in volume. In LSNAA the sample is irradiated at a research reactor and is subsequently transferred to a gamma ray spectrometry system to be counted either as a whole or using a scanning geometry counting configuration. Corrections are required for self-shielding of the activating neutrons, self-absorption of gamma rays, heterogeneity of the sample and the geometric factor during gamma counting. Analysis of the acquired gamma spectroscopy data allows for the evaluation of the elemental composition of the sample. Our research group has successfully developed and applied the LSNAA technique for the analysis of intact ceramic vases as well as to demonstrate the feasibility of analysis of irregularly shaped pottery artifacts and heterogeneous objects. The recognition of potential applications of LSNAA in the field of archaeology for the analysis of intact precious objects and findings necessitated the validation of the technique through an inter-comparison study organized under the auspices of the International Atomic Energy Agency (IAEA) through the research project ‘Application of LSNAA for Inhomogeneous Bulk Archaeological Samples and Bulk Objects’ and is summarized in the IAEA TECDOC No. 1838 ‘Advances in Neutron Activation Analysis of Large Objects with Emphasis on Archaeological Examples’.

The potential of large sample photon activation analysis for multi-element, non-destructive analysis of metallurgical tap smelting slag using high energy medical linear accelerators as photon source was also investigated in our group. An absolute quantification method was developed for this purpose. The results of the analysis were compared against values obtained by instrumental neutron activation analysis with satisfactory agreement. The advantages of the technique include improved representativeness of results by analysis of larger samples, elimination of reference samples, irradiation versatility and convenience as well. The technique was shown to have a great potential for application in early Bronze Age copper ore reduction practices studies and is complimentary to the large sample neutron activation analysis technique also developed by our research group. This work was performed in collaboration with the Paleo-environment and Ancient Metal Studies research group of the Institute of Nanoscience and Nanotechnology. 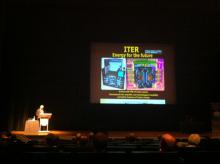