The Joint European Torus (JET) is currently the largest operating fusion device serving as the main test-bed for fusion plant design and technology development. Within the framework of the European Consortium for the Development of Fusion Energy (EUROfusion), a series of experiments are performed at JET aiming to address key aspects of ITER relevant physics and technology under realistic fusion conditions. Most particularly, the planned JET operation with Deuterium-Tritium (D-T) plasma and of a significant 14 MeV neutron production provides a unique opportunity for experimental validation of the computational codes and data used in ITER neutronic design, as well as to test materials behavior under ITER-like neutron irradiation conditions. Outcome of the JET experiments is the provision of a consistent and complete analysis of the tokamak nuclear case in relevance to ITER, as well as to future fusion energy demonstration plant DEMO. 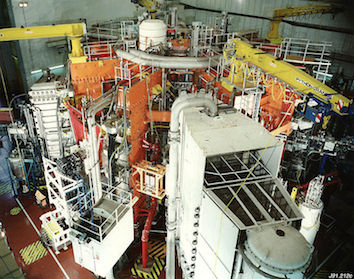 The NEXP project is devoted to benchmark experiments for validating the neutronics codes and tools used in ITER nuclear analyses in order to predict the neutron flux along streaming paths in the biological shield as well as shut-down dose rates due to activated tokamak components. Neutron transport calculations of the neutron flux and doses as well as of the neutron activation of materials both near and far away from the plasma source in large fusion tokamak devices, such as  ITER, are challenging not only because of the complexity of the device but also because of the physical processes involved. Therefore, validation of the state-of-the-art radiation transport codes and nuclear data against experimental results in a real tokamak environment is needed in order to ensure reliability of ITER predictions.

Since 2012, experiments have been performed at JET to measure neutron fluence at several positions throughout the JET Torus Hall using activation foils and thermo-luminescent detectors (TLDs). The results of the measurements were compared against predictions using state-of-the-art deterministic, Monte Carlo and hybrid transport codes and the latest evaluations of nuclear data and a very good agreement was observed. Experiments were conducted during the Deuterium-Deuterium JET experimental campaigns and will be continued in the upcoming Tritium-Tritium and Deuterium-Tritium (DTE2) campaigns. (Collaborators: CCFE, ENEA, IPPLM, JSI – MESCS, VR)

The ACT project focuses on irradiations of samples of materials used in ITER components manufacturing and measurement of neutron induced activities to validate theoretical predictions based on state-of-art codes and nuclear data used in ITER nuclear analyses. This work includes irradiation of a selection of ITER materials collected by Fusion for Energy (F4E) at the JET long-term irradiation stations (LTIS). The characterization of the neutron fields at the irradiation stations is performed using a range of activation foil dosimeters irradiated at the LTIS assemblies together with the samples. After the end of irradiation, samples and activation foils are disseminated across four EU laboratories for measurement using high resolution gamma spectrometry systems.  Irradiations were performed during the D–D experimental campaign concluded in 2019 and they will be followed by irradiations in the highly anticipated T–T and D–T experimental campaigns (DTE2) at the end of the JET schedule. Preliminary results from the D-D campaign showed that activity predictions obtained by neutron transport and activation simulations using the latest JET models were in very good agreement with the activity measurements, demonstrating a successful simulation approach and JET model predictive capability (Collaborators: CCFE, ENEA, IFJ, F4E)

Development of a neutron detector for fusion applications (VERDI)

The VERDI project aims to develop a detector which will provide a robust approach for accurate neutron monitoring under the harsh conditions encountered in a fusion plant environment. In particular, detectors required in Test Blanket Modules must be capable to accurately measure neutron fluence under high and variable neutron fluxes, high gamma background, high temperature, high and variable magnetic fields. This imperative need for the materialization of fusion power as a sustainable energy source is the inspiration for the VERDI project. The VERDI detector comprises a low activation capsule, constructed using a ceramic material, containing a defined concentration of added metallic elements. The neutron fluence and energy spectrum is derived by analysis of the multiple gamma lines produced by the activation of the metallic elements in the capsule. The ceramic capsule is able to withstand radiation damage from energetic particles, while exhibit minimal interference with the electric and magnetic fields in the tokamak. The outstanding capabilities of the VERDI detector have been demonstrated at experiments performed in fusion relevant neutron fields at the ENEA Fast Neutron Generator (ENEA-FNG) as well as under real fusion conditions at the Joint European Torus (JET) (Collaborators: CCFE, ENEA).